Born in France in 1964, Jean Jacques, “JJ”, inherited his father, Dr. Jacques Perodeau’s passion for collecting, shooting, and hunting. One might say that guns were in his blood. JJ found himself fascinated with guns, and also with a local gun shop that he and his father visited regularly.

At the age of ten, JJ approached the owner of the local gun shop for a summer job. The owner, Michel Burner, who was trained by Garnier in St. Etienne, gave him the job. The work consisted of stripping and cleaning auto loaders. The pay: shells and clay targets. This was a win/win situation for both of them. While a few springs became UFO’s during the first few weeks, JJ’s enthusiasm with the trade grew deeper. His destiny was sealed. JJ wanted to become a gunsmith. 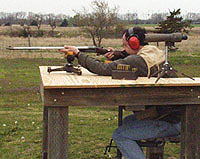 After high school, JJ attended the Liege Belgium Gunsmithing School for three years. This is one of the finest in Europe. With world renowned instructors like Marcel Thys, JJ developed into the master craftsman and gunmaker he is today. Upon graduation, JJ returned to his mentor and friend Mr. Burner, where he showed off his skills and worked for one year. 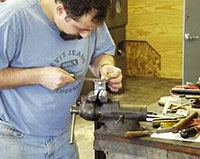 Opportunity kept knocking, and JJ’s career and popularity continued to rise. After working four years in Metz at the German border for Eduard Kettner, JJ decided to continue his work in the United States. In 1990, Jack Rowe and George Caswell answered his call and JJ moved to Enid, Oklahoma. In 1996, JJ bought the service department of Champlin Firearms, Inc. and began working with partner, George Caswell. In 1998 JJ became a U.S. citizen.